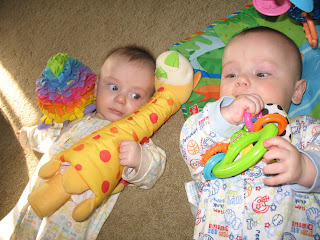 Those of you who know little Camden, know that his "wingspan" is large. We really think we may have the next Micheal Phelps here. But the way he is eyeballing Miles' toy (after he already had two), was just too FUNNY!
Both boys had a good check up last week.
Miles weighs 14 lbs., 14 ounces
Camden weighs 13 lbs., 3 ounces
We think Miles was trying to "make weight" because he hadn't pooped in 3 days before he got weighed and then pooped several times later that afternoon.
Camden is still .25" taller than Miles. But overall, Miles just looks bigger than Camden, bigger feet, bigger hands, bigger head. Camden may be on a comeback though. He ate an additional 4 ounces last night (really rare for him to want a bottle after breastfeeding)- so we're starting cereal today. So far seems to be a hit!
Posted by Demaragreg at 11:50 AM