Nothing else to say :)
little sexy men
Posted by Demaragreg at 4:31 PM No comments:

We got some of the cutest galoshes for Easter. It has been a dry spring and we have been sick, so we haven't had much time to play in them. Finally- last week in rained. It also got really cold, but Mama let us out to play. Look out puddles! 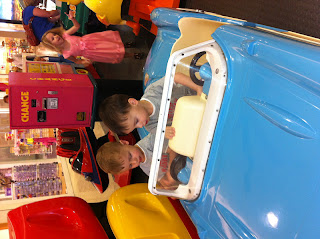 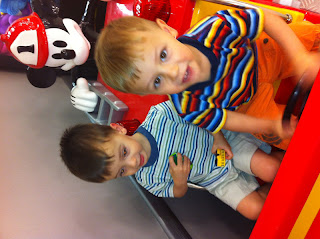 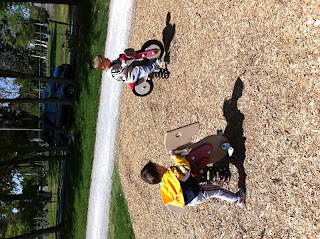 We have been swinging like this a long time- don't know how much longer they will let me do it.
Race Car Driver
Brrrrummm!
Posted by Demaragreg at 12:33 PM No comments:

Here comes Peter Cotton Tail! Even though we were fighting a cold, we had lots of fun on Easter. Egg hunts, chocolate, Nana and Poppa and the Easter bunny. The weather was a bit cooler, it made for the perfect spring day. 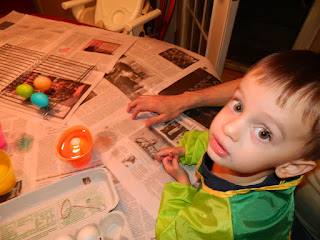 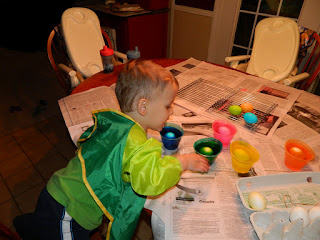 Look at all those eggs! Just for me? 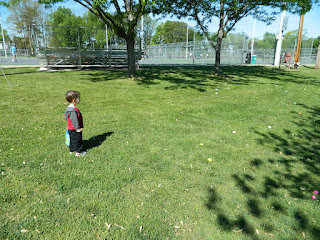 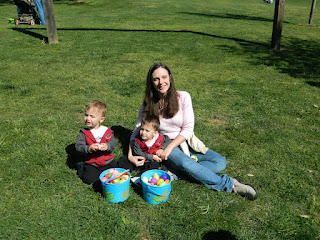 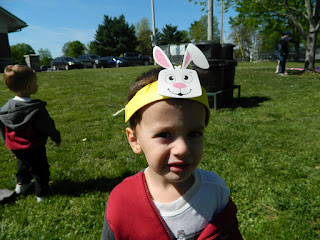 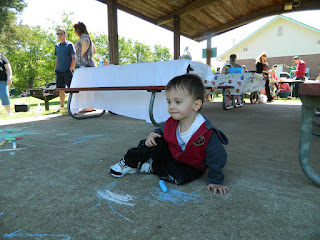 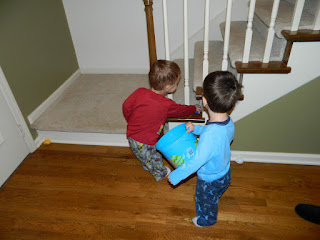 I thought it was really funny when I walked in and saw them putting together puzzles. 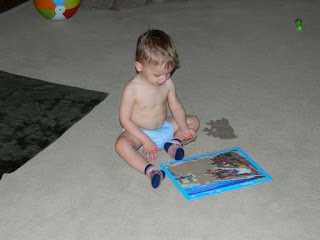 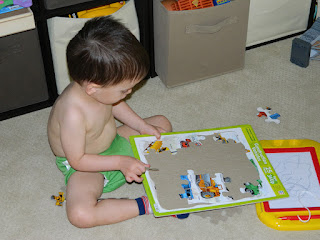 Posted by Demaragreg at 7:44 PM No comments:

I can't believe that my babies are 2 1/2! We went for our annual Easter Bunny picture and as you can tell, Miles was not as thrilled with the Bunny as he was with Santa. Camden was very enthusiastic. He talked to the bunny and gave him a high 5, Miles really didn't want anything to do with him. Now, in Miles' defense, he was getting a cold, so it may have been the virus acting out and he really loved Bunny.... but I wouldn't bet on it. 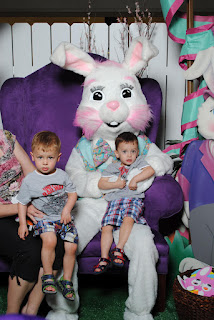 We are moving into big boy underpants and so far things are going well (better than I expected I must admit).
Things we are saying... I gave Camden a sticker for using the potty and I guess he had pointed to a puppy sticker. I had given him the wrong sticker and he looked at me and said, "That's not a puppy, that's a bear." It just floored me. This coming from someone who was just saying pur-ple 6 months ago.
Mono-ni-cle- motorcycle
Bean- James (from Thomas and friends)
Peepee- Percy (Thomas and friends)
Tata-- Thomas (Thomas and friends)
They still call each other My-my and Gun-gun (but they can say Miles and Camden if you ask them to).
We can name all our colors and sing the ABC song (with a little prompting). Sometimes we count correctly to at least 10. They love to sing. Camden in particularly, but both boys do it. Our favorite songs- Moon song (Laurie Berkner)- Elmo's song, itsy bitsy (sometimes with hand motions), Sing a song (sesame street), I gotta new way to walk (Destiny's child, Elmo).
Posted by Demaragreg at 11:57 AM No comments:

Our local performing arts center offered Sesame street live with our favorite characters and of course ELMO! We really enjoyed the show. We got a bit tired towards the end, but overall had a great time. 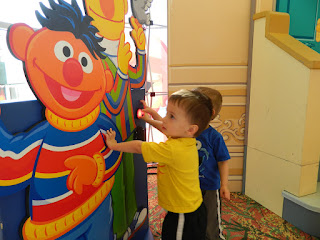 Posted by Demaragreg at 6:52 PM No comments: