End of a run

It is probably my fault. I was talking to a friend, commenting on how nice it has been that the boys have been well. Miles started running a fever the next day. So far, that's it. We are sitting holding our breath waiting to see what it may blossom into. Poor Miles has a sore throat today with his fever, but overall things have been ok. Thank goodness for Tylenol and Ibuprofen. These are some candid shots from the last couple of weeks. 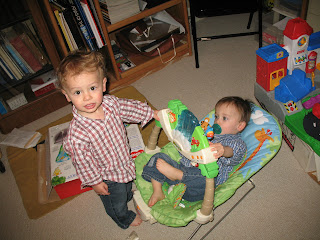 I have been meaning to put their bouncey's away, but they have rediscovered them. We often wonder do they remember them? Or is it just something novel to play with? 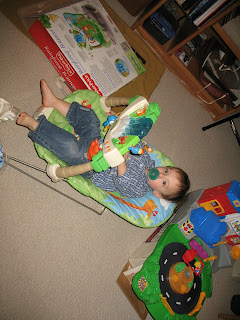 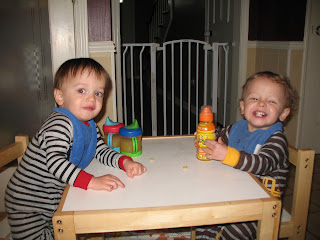 They were being real stinkers at breakfast the other morning, so I had to stir it up a bit to get them to eat. I decided to get out their little table. It went over really well! They both sat there and ate their yogurt and cheerios. I still like to think of them as babies, but they really are becoming big boys. 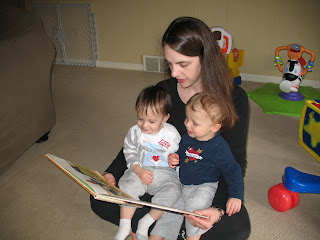 They are both big lap boys. They will bring over toys or books and just flop on down- you had better be ready. This is still our favorite, "Animal Friends and Neighbors." 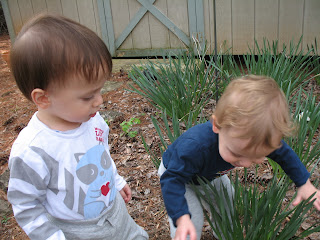 All of the flowers are in bloom around our house and Greg and I have been trying to teach the boys to sniff them. Sometimes Miles gets a little a confused and bites them instead. 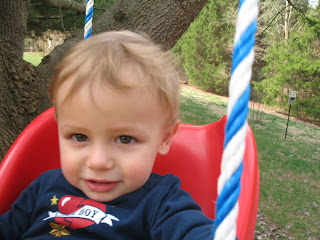 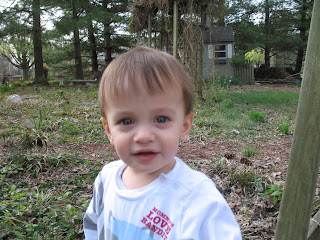 An update on our progress:

Miles- he calls his lovey "ba," " bow, wow" and is getting better and better at puzzles. It is also really cute, he takes bites of food and says "mmmm."

Posted by Demaragreg at 6:03 PM