I was beginning to wonder if the babies were going to be like my pregnancy. Everything I read and was told was that my nausea was probably going to go away- needless to say they were wrong. I even vomited most the day that they were delivered. Anyways, 6 weeks was supposed to be a landmark age and fortunately it was! Things have been slowly improving. Breastfeeding is going better. They are no longer causing me as much pain, and feedings take about 40minutes as opposed to an hour and 20minutes. We found out that an afternoon nap is imperative to their functioning. For the last couple of days, as long as they get a 2+ hour nap, their afternoons are much better! For this to happen, someone has to sit in the rocker with them, but hey small steps. Miles has officially smiled- granted to appears that it was at the couch and then at the lights, and once more to the TV. He is working on it. Camden has overall become a much more pleasant baby- we don't know whether it is the nap, the Gripe water or that I have decreased my milk intake, but who cares! They are now sleeping in separate beds. Camden demanded this in his own way and nights have been much smoother since then. I think Camden will be much happier when he can communicate by other than crying. For a while, Miles was our little T-rex. Although we thought that Camden had the worse reflux, Miles' reflux caused him to be persistently hoarse. He has been on Prevacid for 4 days and is much improved. Hopefully with this new leaf, I will be able to post more consistently... but you'll have to take that up with the boys. 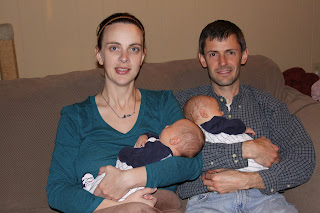 Uncle Daryl should love this one 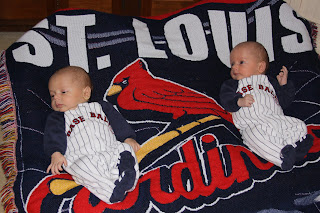 Auntie Em with Camden at Thanksgiving. He was such a charmer! The boys love their Auntie Mary and Auntie Em. 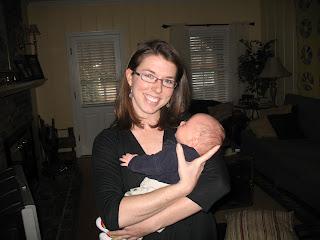 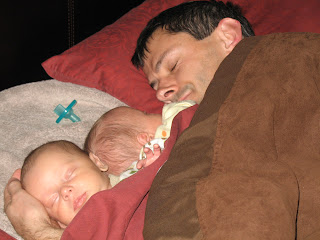 Posted by Demaragreg at 6:30 AM